Merck has bagged the European Commission approval for the combination of its anti-PD-1 cancer immunotherapy Keytruda (pembrolizumab) with Lilly’s chemotherapy drug pemetrexed (ALIMTA) and platinum chemotherapy for the treatment of a certain form of metastatic nonsquamous non-small cell lung cancer (NSCLC).

The latest Keytruda approval is for the use of the cancer combination therapy as first-line treatment of NSCLC in adults with No EGFR or ALK genomic tumor aberrations.

With the approval secured, Merck can commercialize the Keytruda chemo combination treatment in all 28 states of the European Union in addition to Norway, Iceland and Lichtenstein.

According to Merck, the dosage strength that has been approved is 200mg, which has to be administered once every three weeks until disease progression or the toxicity levels become unacceptable.

Keytruda, which is a humanized monoclonal antibody, has been designed to improve the ability of the immune system in detecting and fighting tumor cells. The anti-PD-1 cancer immunotherapy inhibits the interaction between PD-1 and its ligands – PD-L1 and PD-L2, thereby activating T lymphocytes which can impact not only tumor cells but also healthy cells. 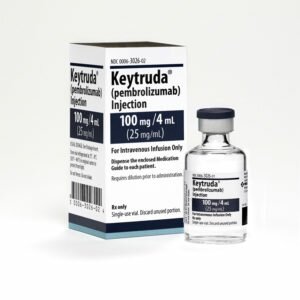 Frank Clyburn – president, Merck Oncology, commenting on the latest Keytruda approval in Europe, said: “Lung cancer is the leading cause of cancer death in Europe, and we are committed to doing everything in our power to help address it.

“Today KEYTRUDA is now approved across Europe for the treatment of appropriate patients with metastatic nonsquamous non-small cell lung cancer as both a monotherapy and in combination with chemotherapy.”

The Merck cancer combination treatment has been approved by the European Commission based on the Keynote-189 phase 3 trial results.

The late-stage trial, which was carried out in metastatic nonsquamous NSCLC patients with or without PD-L1 tumor expression status, compared the Keytruda chemo combination against standard-of-care chemotherapy alone.

Commenting on the approval of Merck cancer combination therapy in Europe, Dr. Roger M. Perlmutter – president, Merck Research Laboratories, said: “We are very pleased that the European Commission has approved KEYTRUDA in combination with chemotherapy based on the significant survival benefit demonstrated in the KEYNOTE-189 trial. This approval is a first in Europe and adds to the rapidly growing role of KEYTRUDA as a foundation for the treatment of lung cancer.”